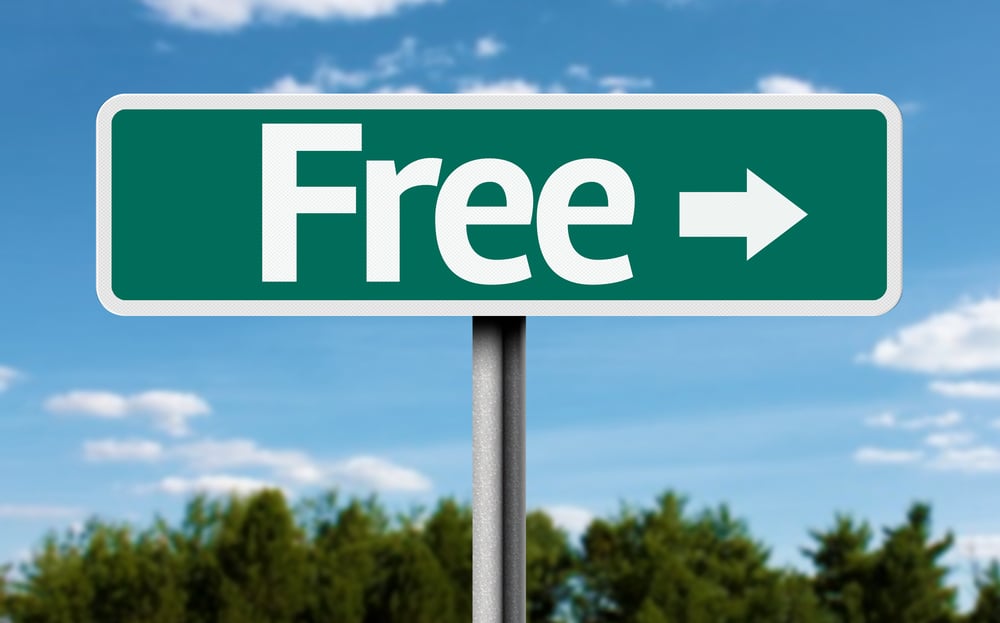 Shopify is now home to over a million merchants spanning 175 countries. Because of this, it became Canada's second most valuable company in 2019. The Great White North, after all, is where the multi-national eCommerce firm started.

Fast forward to 2020, and Shopify has become even more prominent, raking in $121.3 billion.

Despite all of this, Shopify isn't the only eCommerce platform on the market. And, it may not even be the best. There are quite a few Shopify competitors worth checking out. After all, even if it's one of the world's largest eCommerce platforms, it's still not for everyone.

Ready to learn what these alternative (and free) eCommerce solutions are? Then let's dive right into it!

Before we discuss Shopify alternatives, let's talk about Shopify and its pros first.

There's no doubt that Shopify is a capable general-purpose eCommerce platform. There's no need to have a coding background, as it's very user-friendly. It also has an intuitive and easy-to-navigate interface that's ideal for beginners.

Shopify also makes it easy for online stores to change their look themselves with a variety of themes. Many of these optimized and responsive themes are also free.

Canada's largest eCommerce company also has a massive app ecosystem. This means that you're not going to have a hard time finding innovative features for your shop. However, many Shopify merchants have pointed out that the platform may over-rely on their app store, lacking in built-in features that come with the cost of service.

To top it off, Shopify utilizes advanced servers and web hosts. It even manages cybersecurity, which, by the way, is a $112 billion industry. It utilizes cutting-edge online security, so you can worry less about getting hacked.

Shopify's support is also available 24/7, making it easy to contact their customer and technical support specialists. You can also reach out to third-party consultants if you need extra help.

Why Shopify May Not Be Your Best Bet

The Shopify pros mentioned above are sound spectacular, right?

Indeed, but all of them also come at a price. That could be anywhere from $29 (Basic Shopify) to $299 (Advanced Shopify) a month. There's a mid-level package too, which costs $79 monthly.

Also, many of the apps that can add functionality to your Shopify store aren't free. Most do offer free trials, but only for one to two weeks. After that, you either have to upgrade to the paid version or uninstall the app.

There's also quite a long list of items that you can't sell on Shopify. At the top of the list is drug paraphernalia, which is the same for most other eCommerce platforms. However, even vaporizers or CBD oil can't be sold on Shopify.

In fact, in the earlier parts of 2020, Shopify banned thousands of users for selling masks and sanitizers. While it was to prevent profiteering, many legitimate businesses still suffered. If your business was affected by this ban, you should check our list of alternatives for selling Shopify's prohibited products.

In addition to these, designing and maintaining a Shopify website might require you to hire one of their Shopify Experts. This is due to their proprietary template language, "Liquid", which adds costs for tasks that could easily be completed by anyone on other platforms.

With all that said, you can already see how Shopify can be great or bad for your business. If you think it's the latter, then worry not, as here are your top five alternatives to Shopify.

WooCommerce is one of the few eCommerce solutions that offer a completely free plan to date. It's an open-source plugin that allows you to build a site that's comparable to pricey carts. It's a WordPress-specific plugin, though, so you first need a WP site.

Once you have a WordPress-based shop, you can get and install the free WooCommerce plugin. It's intuitive enough that you can even create a mobile-friendly site with it. In this case, you'd only have to pay for the website's hosting service, domain name and security.

WooCommerce also offers free extensions and other useful plugins. Most aren't free, but unlike Shopify that charges a monthly rate, you can get a lot of them with a single payment.

There are also no other extra transaction fees when you use WooCommerce's free plan. All in all, it's easy to set up, provided that you have some tech skills.

The biggest drawback to this free Shopify alternative is its lack of technical support. If you encounter glitches with WooCommerce, you'll have a hard time figuring out the cause. In addition, there are times wherein WooCommerce sites can run pretty slow.

BigCartel, founded in 2005 in Utah, has gained enough traction that it has served over 1.5 million users. It used to focus on musicians, but it has since expanded its reach to artists and artisans. It's become big enough to rake in revenues of around $10.3 million back in 2017.

BigCartel's plans are already affordable, but it also offers a free package. The no-cost program, however, is only for businesses with five items or fewer.

The free plan allows you to attach one image per item, as well as promote it via Facebook and Instagram. It also comes integrated with PayPal, making it easy to use. There are a few free themes to choose from to spruce up your store.

With that said, the free plan has limited features, and only works fine for stores with few items to sell. There's also no inventory search tool, nor is there chat or phone support.

There are two Magento eCommerce platforms available: Magento Commerce and Magento Open Source. The latter version is the free, downloadable one.

As a free eCommerce platform, Magento Open Source is incredibly rich in features. So much so that it's an excellent solution for mid-sized to larger enterprises. It very scalable and flexible while also accommodating larger sales volumes.

To make the most out of Magento Open Source, though, you need to have a coding background. This is also why it's best for bigger stores, as they can afford to have in-house programmers.

Wix is another eCommerce platform that offers a free Shopify alternative. This plan gives you free access to the drag-and-drop site editor to create your online store. You also have dozens of free themes to choose from, eliminating the need to code.

The free plan also comes with 500 MB worth of storage and another 500 MB of bandwidth. Wix also makes customer support available for their free plan users.

As with free plans, though, expect limited features, which means you'd need upgrades. For instance, you'd have to pay a fee to integrate online payments. Also, your site would have a Wix-assigned URL, as well as display Wix-branded ads. 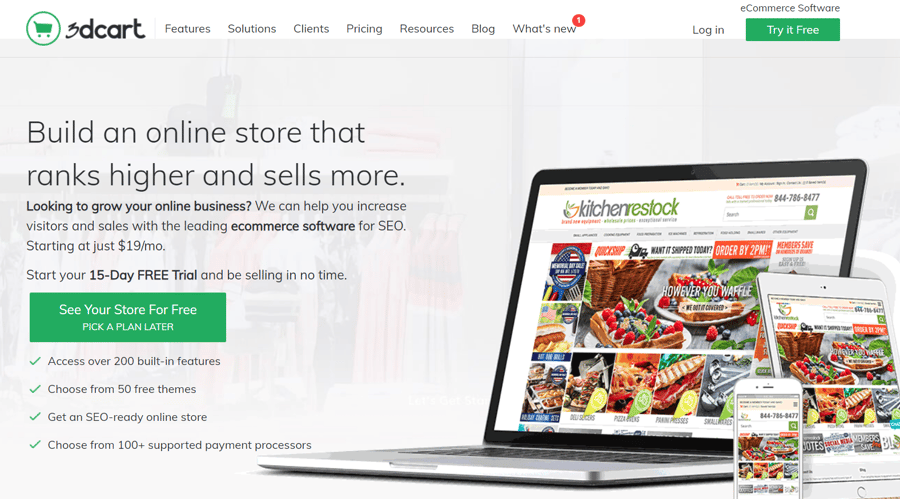 3dcart, headquartered in Florida, is smaller than Shopify but offers far more features. It has grown so much over the years, though, that ten years after its launch in 2004, its user base reached 17,000 stores. Today, the company continues to help over 22,000 businesses thrive in the online market.

3dcart isn't exactly free, but it's one of, if not the only eCommerce platform offering a free 90-day account. This is a part of its COVID-19 Assistance program, which aims to aid businesses in these trying times. By signing up, you'll get access to all of that specific plan's features.

3dcart is such a feature-rich platform that you can quickly build an online store, be it large or small. The interface is easy to use, so you don't have to know a single line of code.

Unlike Shopify, there are no transaction fees, and you can use over 100 payment methods. Each plan also comes with a built-in blog, API access, Facebook Store, and shopping cart.

To top it off, 3dcart's support team is ready to help 24 hours a day, seven days a week, 265 days a year. If a glitch occurs in your online store, you just have to ring them up, and they'll get it fixed for you as soon as possible.

Do keep in mind that, since the first 3 months are free, you have the option to cancel before the 3-month offer ends. 90 days should be enough time, though, to see how 3dcart excels compared to other platforms. Plus, their unique Dropshipping Plan is only $9.99/month for the life of the account.

Start Selling Now With the Help of These Shopify Competitors

Despite all its bells and whistles, Shopify simply isn't for everyone. As such, it's best to take the time to explore all your options, including Shopify competitors. Many of them offer free trials anyway, so that's all the more reason to check them out.

Want to give 3dcart a look-see to experience the difference it makes for eCommerce? Then please feel free to start your free 15-day trial now!

The 3 Best Digital Online Job Ideas to Work from Home and Make Money
Whether you’re looking for a way out of the 9-to-5 grind, trying to get back on your feet, or are just looking for a new adventure, more and more people are realizing both the potential and ...
Read More
The Importance of Commercial Insurance for Ecommerce Businesses
Did you know that 40% of small businesses file an insurance claim in any given 10-year period? If that scares you, it should. Commercial insurance for small businesses is essential. You don't want to ...
Read More
10 Project Management Tips to Help Grow Your eCommerce Business
Launching an eCommerce business is easier now more than ever. This is, in many parts, thanks to the prevalence of affordable eCommerce platforms, tools, and resources. But as your online business ...
Read More