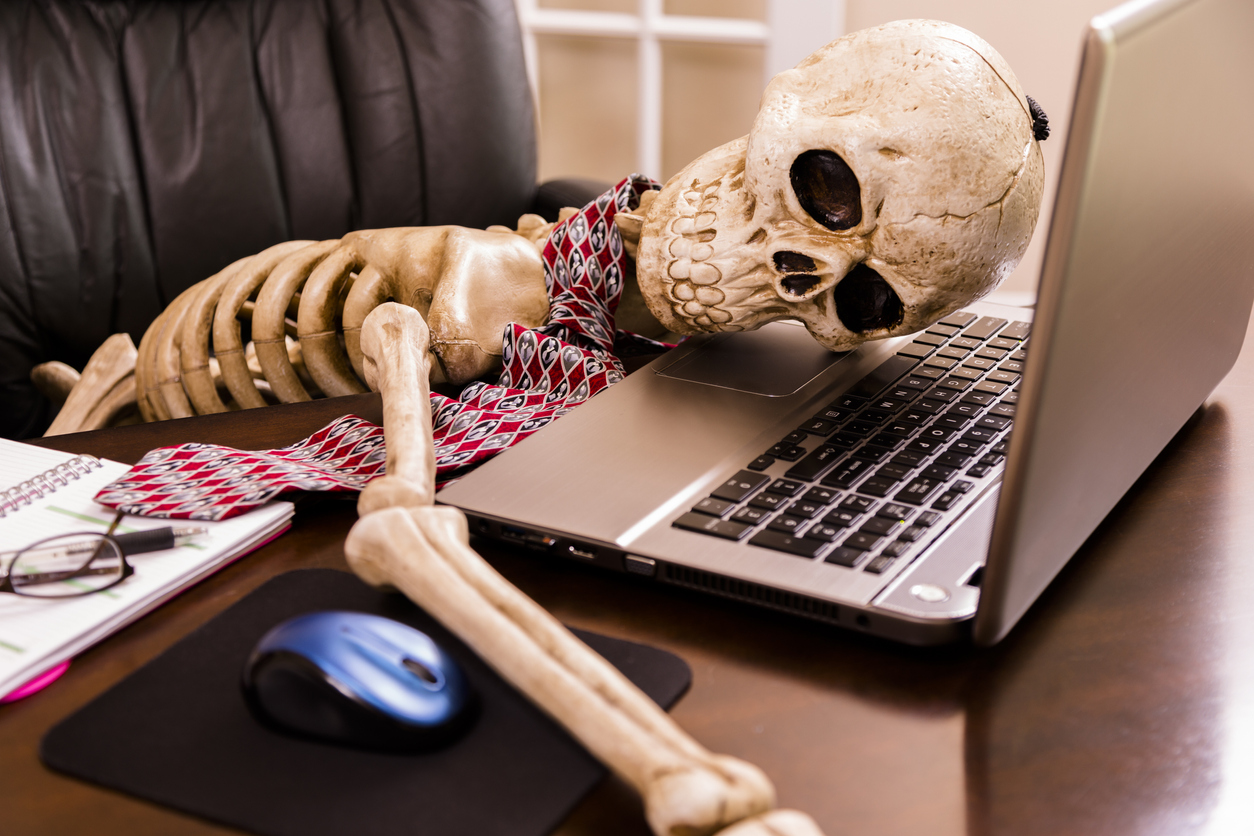 If you’re like most ecommerce businesses, you have a lot of email lists in your database: lists of emails you collected through special lead capture campaigns, lists of customers that made one purchase and never returned. And, the list goes on.

Some of these email lists are probably old and obsolete because you haven’t sent an email to them in months. Or, maybe you’ve been sending an email once every month or so. In any case, the trouble is that these lists don’t have any quality control or measurement on how engaged their users are.

But, now that you’re ramping up your email program, and possibly migrating to a new email service provider to accommodate high-volume email marketing, you may need to start using those old email lists. Sadly, sending email broadcasts to these old lists isn’t as simple as just sending regular emails to them.

First, you need to remove the bad email addresses from these old email lists. Then, there’s a process for gradually re-engaging a dead email list. Taking these steps will protect your sender reputation, save you from deliverability headaches down the road, and help you squeeze the most value out of your re-engaged lists.

Here’s everything you need to know in order to re-engage your dead email lists. 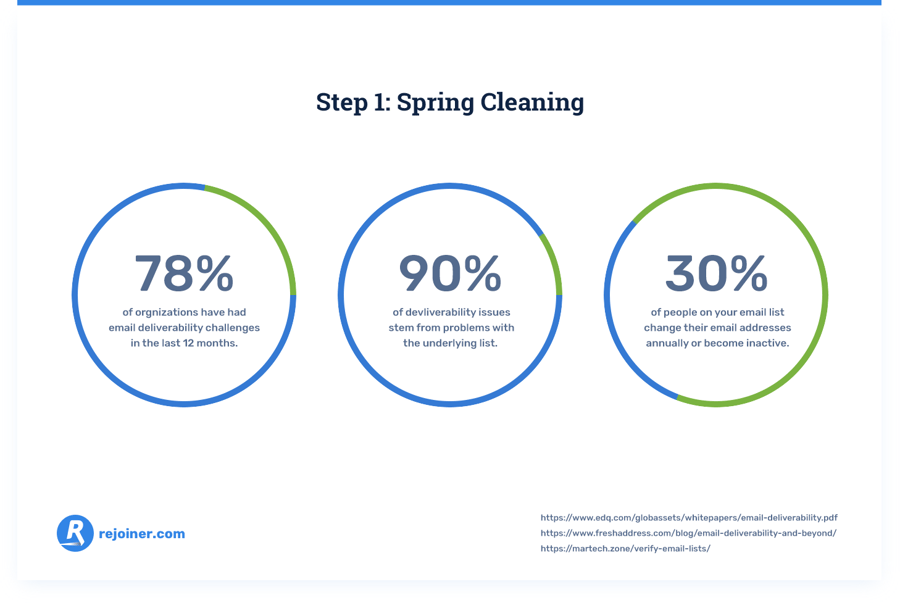 Before you do anything with your email list, you’ll need to remove all the email addresses that aren’t useful. When going through your list, these are the addresses that you’ll want to get rid of:

Invalid and fake emails are the easiest to remove. You can run your lists through an email validator to identify all the false and invalid emails. On the other hand, inactive subscribers are a bit trickier to remove.

Removing these emails might feel bad. Removing inactive subscribers could cut down your list by half or more. And, it might feel like you’re losing opportunities. But, the reality is that you’re not losing any opportunities.

Inactive subscribers are not your customers. They’ve demonstrated that they’re clearly not interested in your brand. If they won’t even open one of your emails, they definitely won’t buy from you. So, you’re not losing any potential revenue by removing them from your email list.

Ultimately, the size of your email list is a vanity metric. Your email campaign will perform much better if you send to a smaller list of highly engaged subscribers, rather than sending to a huge list that has a massive swath of inactive subscribers.

How to Send Re-Engagement Emails to a Dead List

Once you’ve trimmed all the inactive subscribers from your dead email list, it’s time to start sending emails to that list. Generally speaking, you want to start with a low volume of emails, and ramp up until you’re sending email broadcasts to the entire list.

As you ramp up the send volume, monitor the engagement and deliverability to make sure that there aren’t any issues with your emails or with the list. Here’s the factors to look out for:

If the bounce rates are high or you see a lot of unsubscribes when you send to the list, you need to check the list for bad email addresses again, and broaden what you consider to be an inactive subscriber.

If the open rates are unusually low, don’t panic. Look at two things before you shred your list:

The next step is to start sending emails to the dead lists that you’ve cleaned up, and ramp up the send volume over the course of about a week.

Here’s how to ramp up your email sends:

Once you’re sending broadcasts to your entire list without any major deliverability or subscriber engagement problems, that list is safe to start using for regular email broadcasts.

Here are a couple of quick tips for reviving your dead email lists:

If you work with a quality email service provider, they will have a program for re-engaging dead lists. They’ll manage your send volumes for you. That way you don’t have to wonder if you’re doing it right. 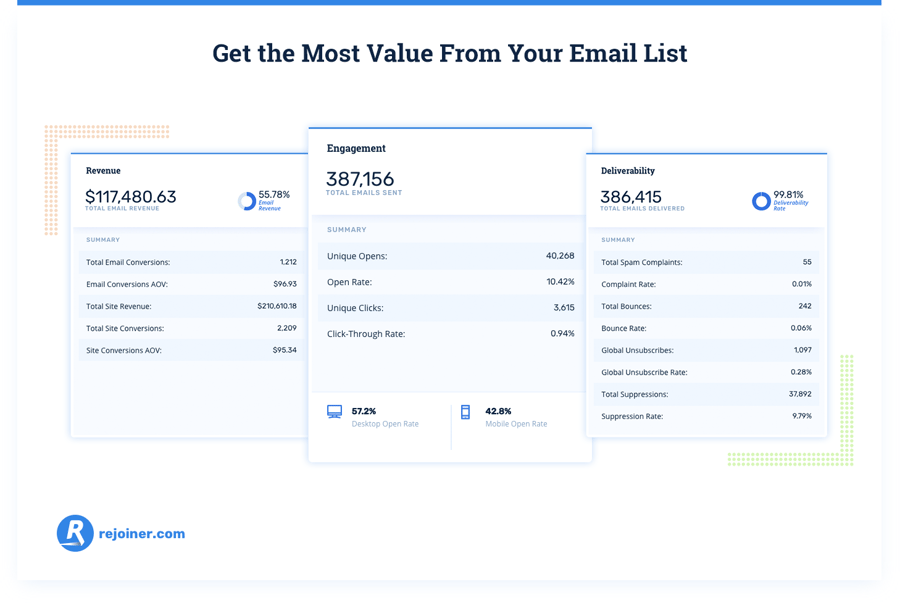 Your old email lists can be incredibly valuable. Especially when you’re dealing with lists of people who have already made a purchase or subscribed to your list with little incentive.

Slowly re-engaging dead lists ensures that you get the most value from your email list building efforts without damaging your sender reputation. In other words, you’ll recover old revenue without endangering future profits.

After following all of these steps, you'll end up with a clean, healthy, and engaged email list that won't sit like a dead weight in your email marketing campaign strategies. Do you have old lists that you want to re-engage? Utilizing an email service provider with experts like Rejoiner can help. Request a demo to discover how Rejoiner can help you capture revenue from your dead lists.

How Email Automation Can Boost Your eCommerce Conversions
The eCommerce bug has literally taken the world of business by storm. Marketers and entrepreneurs alike are still excited about this business concept despite it having been around for quite some time ...
Read More
5 E-Commerce Marketing Email Examples That You Should Be Sending
If you’re an ecommerce marketer, email marketing should be your best friend. Email consistently outranks other digital channels such as social media and display ads in terms of return on investment. ...
Read More
Email Automation: An Indispensable Part of Marketing Strategy [INFOGRAPHIC]
Email marketing is effective only if you can tap on the right pulse of the subscriber. You must adhere to the email marketing triad—that is, sending the right message to the right person at the right ...
Read More