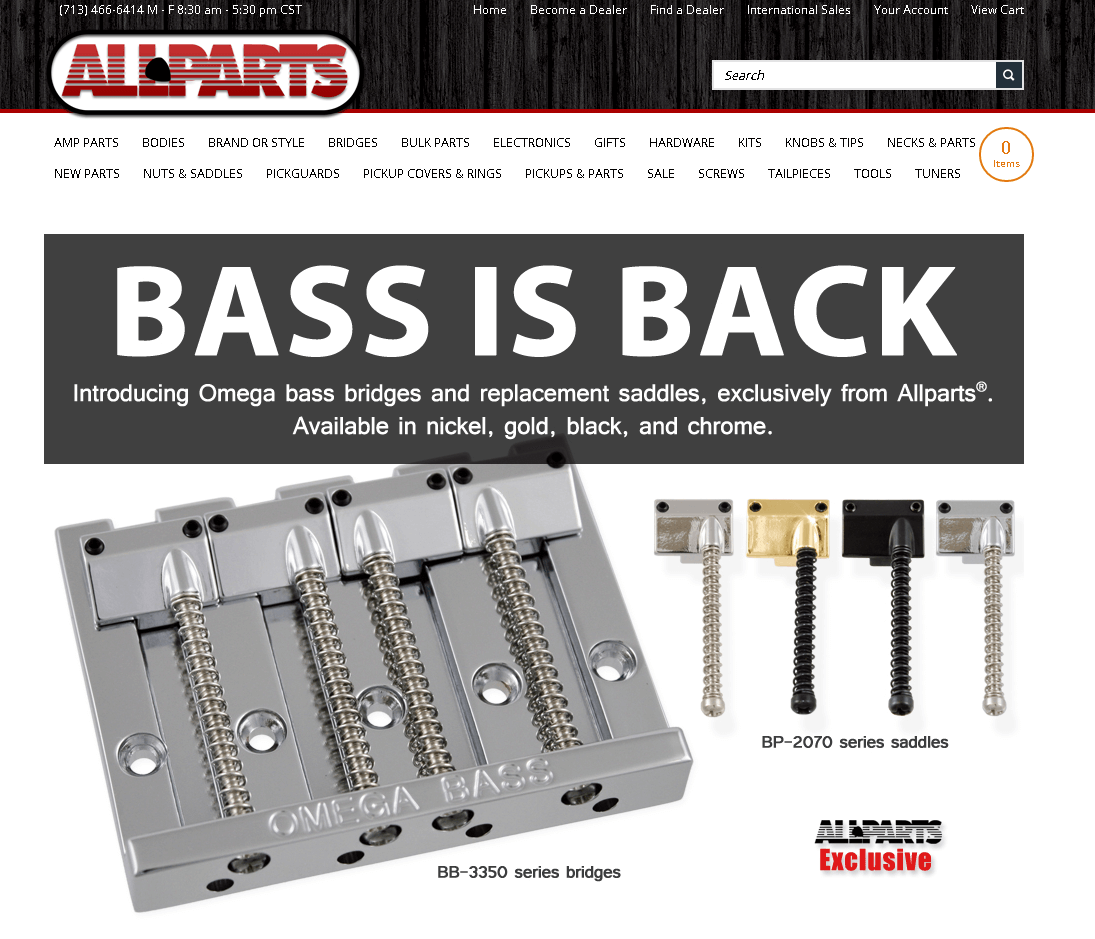 Allparts Music Corporation has provided manufacturers, wholesalers, musicians, retail stores and guitar repair shops around the world with guitar and bass parts since 1982. As the world’s largest distributor of guitar, bass and amplifier parts, with international distributors on six continents, Allparts uniquely understands the symbiotic relationship between quality guitar parts and quality music, a notion their success attests to.

Having experienced wholesale success since the early 80s and an online presence since the mid-90s, Allparts is all too familiar with the ins and outs of eCommerce. Over the years, their business has developed a unique structure that allows them to cater to B2B and B2C, although the bulk of their sales still stems from manufacturers and shops. But like all growing businesses, Allparts’ needs and demands evolved as their business found global success.

In 2009, Allparts’ IT director, Dean Peckenpaugh, decided it was time to upgrade the company to a new software platform, and sought the help of Volusion, with whom he’d worked with in the past. Only a short while after the transition, however, Dean began to notice that things were amiss.

“Volusion had undergone a huge migration, moving all of its content off of Rackspace and onto in-house servers,” Dean explains. “Soon after, the company started experiencing problems with uptime for its stores. That problem continues today.”

To complicate matters further, partnering with Volusion threatened Allparts’ business model, with Dean continually having to evaluate and update an enormous amount of custom code. “Every time Volusion changed something, we were concerned about how it might affect the site,” says Dean. “There were actually times when things suddenly broke. It made us feel vulnerable as a business.”

A year later, after being hit with consistently astronomical bandwidth overage fees, Allparts decided to look for another long-term eCommerce solution.

Although their search initially led to Magento, it didn’t take Dean long to realize their platform would require a dedicated team of people to run the site: “I’m the one-man show running our software platform,” he says. “I’m not a developer or a designer. We didn’t have the budget to hire on extra specialists, so Magento was clearly out.”

Further research led to 3dcart, which Dean found appealing for a number of reasons.

“Not only do we pay lower fees with 3dcart—it’s also a slimmer platform that consumes less bandwidth than Volusion to perform the same actions,” Dean explains. “We get more bandwidth with 3dcart and use less. Even if we went over our core package, which we rarely do, it wouldn’t cost us half as much as Volusion.”

In addition to 3dcart’s low monthly cost, Dean also found the platform’s ease of use, customer segmentation, and simple customization as appealing factors that swayed his decision.

As the cherry on top, Allparts was able to save tens of thousands of dollars by using 3dcart over Volusion's pricing.

Want to share your own story with the world? Fill out our form to be featured on our website and/or blog.